Please, contact the club secretary prior to your visit so that we can arrange some suitable opponents. 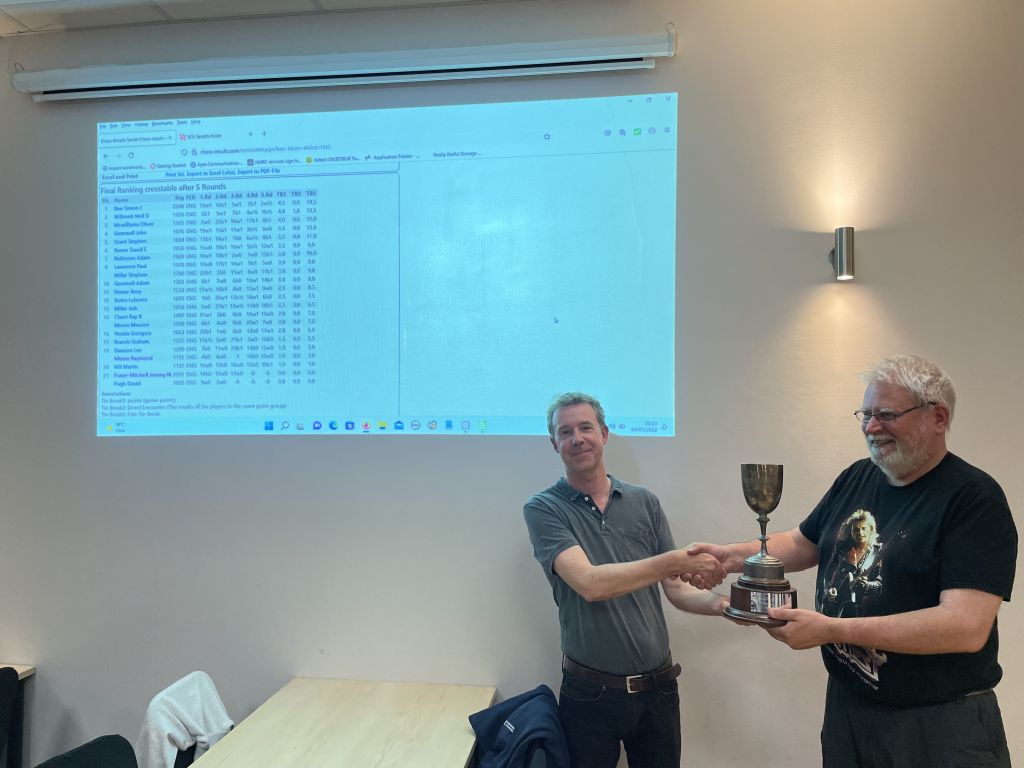 The John Leake Handicap Cup as is tradition took place at the end of the season on Monday 4th July 2022. The event was well supported with 22 club members vying for the silver cup, which dates back to 1906.

Players were paired using Swiss Pairings and clock times set according to a handicap system. The time handicap was applied progressively, at every 100 point rating difference, so that players with less than a 100 point difference played on even terms (10 min each) and those with 600 points or greater incurred the maximum handicap (4 min vs 16 min). 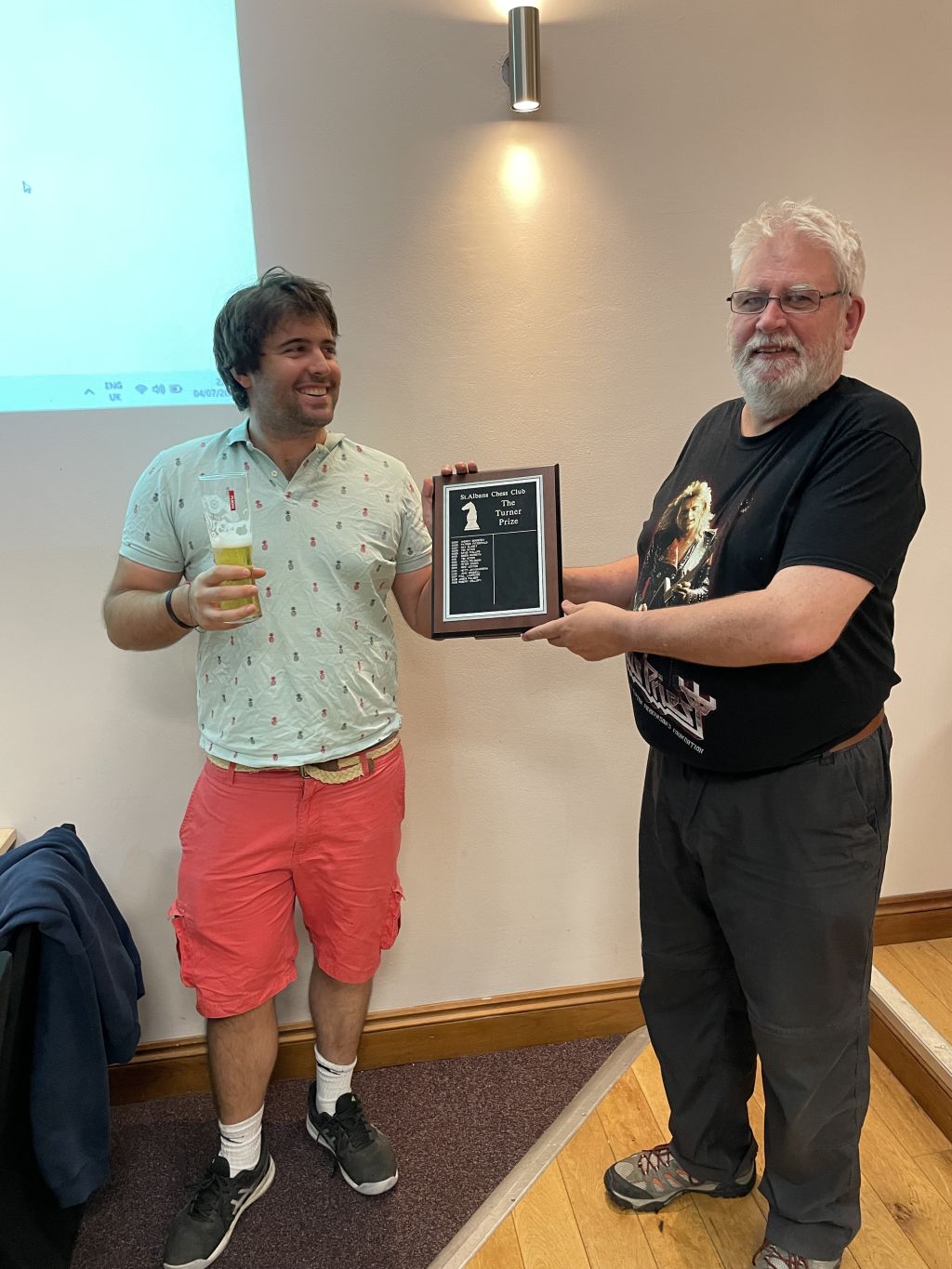 Every year, the player who achieves the best performance over the season for St Albans Chess Club in League, Knock-Out and other ECF-rated standard play matches is awarded the Turner Trophy. To be eligible a player must have played a minimum of 10 games. 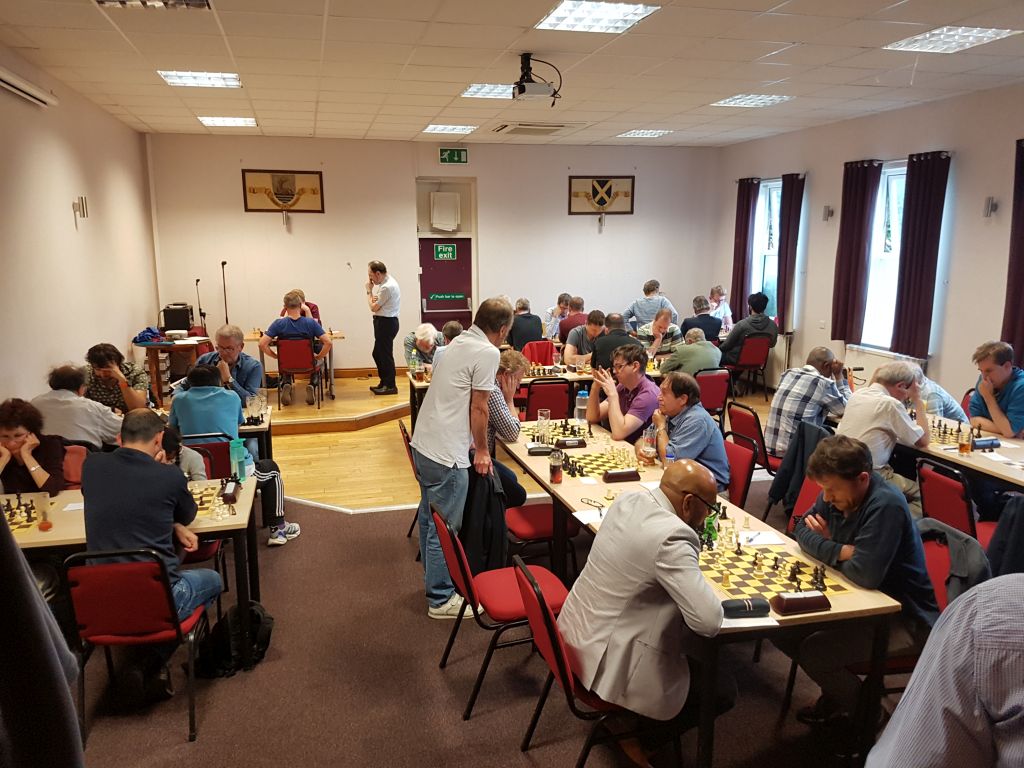 On Monday 27th June we welcomed visitors from Harrow Chess Club to play the annual Double Cross Match.
The match comprised two rounds of friendly rapid play games (25 min plus 5 sec/move from first move) over 20 boards with colours being reversed in the second game.
Refreshments were taken at half time which included a finger buffet and drinks from the bar.
Players' individual game scores can be found from the match card. See link: competitions/double-cross

04 March 2022. The quarterfinal KO stage matches are as follows (with seed number shown in brackets):

Matches are expected to be played by Easter (or end of April if you're really struggling).

Deadlines for Semi-Final and Final are to be determined but expect around end May and end June respectively.

Results from the Rapidplay qualifying tournaments can be viewed using the following links:

Our first meeting was partly devoted to the club's AGM which was well attended with three prospective new members joining us.

Matt Ball, Early Knights Organiser, reported on the Juniors successes during Lockdown when playing in the Five Counties League and J4NCL. Five juniors progressed to the Terafinal of the UK Chess Challenge which took place Online.

Three Early Knights Juniors were invited to participate in the ECF Academy which included coaching sessions with England's leading Grandmasters.

Jeremy was re-elected Club President, Chris Pines succeeds Robert Collopy as Secretary and John Gemmell takes over from Simon Narbeth as Treasurer. Simon was presented with an engraved tankard in appreciation of his long service. Ray Claret continues as Congress Organiser.

Subscriptions fees remain unchanged, although those of existing members will be discounted to compensate for the club nights lost at the end of the 2019/20 season. The 2020/21 season (over-the-board) was missed entirely.

Subscriptions for the new season are now due and the normal early payment discounts apply if received before the end of October 2021.

The Herts Chess League would be expected to start in October, but with the considerable uncertainty as to how many teams each club could support it is likely there may be some delay. The matter will be discussed at the next Executive meeting of the Hertfordshire County Chess Association in early September.